The Big Apple is known for many things – the Statue of Liberty, Times Square, the Brooklyn Bridge, theatres, electronic billboards – but it certainly is not famous for ghost stories. However, this writer, producer, and cartoonist took to Twitter to share that he is being haunted by the ghost of a young boy named David.

The series of tweets started last August 7, 2017 when Adam Ellis said that his apartment is currently being haunted by a dead boy who is trying to kill him. Ellis said that the boy first appeared in his dreams but he believes that because of one mistake he did, the dead boy has crossed over to the real world.

Ellis told his Twitter followers that the first time he saw the child in his dreams, the boy was sitting on a green rocking chair and the child was just staring at him. Ellis revealed that the boy had a particular feature – he had a dent on his head. He uploaded a photo on Twitter of how the boy who is reportedly haunting him supposedly looks like. Ellis went on to claim that the first time he saw David, he was having sleep paralysis. He added that he has sleep paralysis often and it isn’t great at all because he isn’t able to move while sleeping. Accordingly, during the time that the boy first appeared in his dream, the boy initially looked at Ellis but later got out of the rocking chair and walked towards him. Before the boy reached his bed, Ellis woke up and screamed for his life. Little did he know that he would really be scared for his life in the next months.

A few nights after since the first time that Ellis dreamed of David, he shared on his Twitter thread that he dreamt of a girl this time. They were at a library and the girl asked him, “You’ve seen Dear David, haven’t you?” Ellis answered back asking who David was. The girl continued to say that David is already dead and he appears at midnight. The girl then instructed Ellis in his dream that he could only ask David two questions because if he asks a third, he will be killed by David. To be able to ask David two questions, Ellis must be the first to say “Dear David.”

A couple of weeks have passed and Ellis did not think much about it. He thought he would never dream about David again but he was wrong. The same scenario in his dream happened – David was sitting on a rocking chair and was staring at him. This time, Ellis asked in his dream, “Dear David, how did you die?” David reportedly answered that he died because of an accident in a store. Ellis asked his second question, “Dear David, what happened in the store?” David groaned but still answered saying that a shelf was pushed on his head. Ellis then went on to ask the third question, “Who pushed the shelf.” David on longer answered and at that point, when Ellis realized he should not have asked a third question, he woke up feeling really terrified for the possibility of him dying.

After the last dream regarding the conversation with David, Ellis googled about deaths in the city regarding a boy named David but nothing came up.

His Cats Were Acting Funny

A month or two went by without anything peculiar. David then moved into another apartment in the building that was a floor higher than his current apartment. He thought that maybe because of the move, David was no longer able to follow him. He was wrong more than ever. Accordingly, his two cats always stand in front of his apartment door at exactly 12 midnight and stare at it for minutes. He then tried to look through the peephole and believed he saw something moving. He shared that his cats have gone to the same spot for a number of days whenever the clock struck 12. Ellis then decided to use a sound app to record any sound that it hears. The sound app recorded 33 recordings but he found three of them interesting. First is the sound of a snap, second is the sound of an electric static, and his groan.

Ellis went away for the weekend and when he came back, he shared on Twitter that he bought a Polaroid camera. He took a few photos around his apartment and what quizzed him the most was when he snapped a photo of his hallway outside his apartment. The Polaroid developed a pitch black photo so he tried it a second time and the same thing happened. One Twitter user suggested that Ellis take a photo farther away from the hallway and so he did. Ellis took a photo with his iPhone and then with the Polaroid. In the two photos, it could be seen that in the photo taken with a Polaroid, the hallway was again pitch black but in the photo taken with an iPhone, the hallway was well lit. Ellis said that he swore the light was on during the time he took the photo with the Polaroid. Ellis Feels Really Unsafe For The First Time In Months

Ellis hasn’t dreamt of David in months but he still gets weird feelings. This was the worst out of all the incidents that Ellis shared on his Twitter account because he felt like David is really trying to kill him. He shared that in his dream, David was dragging him by the arm through an old abandoned warehouse. He did not fight back and Ellis also did not have any explanation as to why a child had the strength to drag him. Ellis woke up and noticed that he had a huge bruise on his arm – the arm that David allegedly dragged. He then decided to get coffee and noticed a warehouse that used to be bustling with people every weekend. This time, it was different because the warehouse had no crowd and only had a green chair inside. 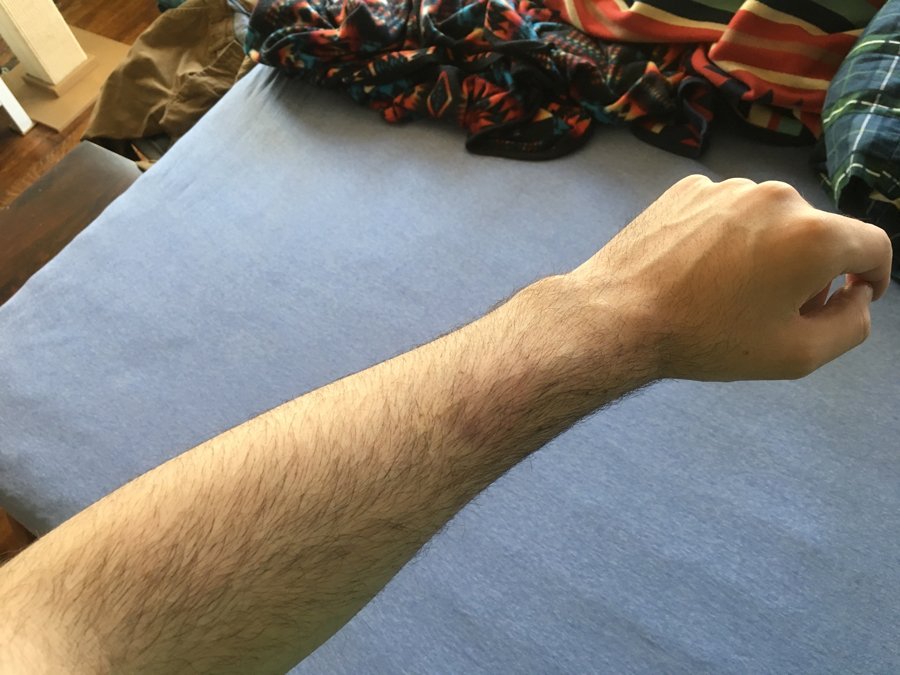 The Call From An Unmarked Number

Ellis hasn’t been visited by David in his dreams but he shared that he has been getting weird calls from an unmarked number. He picked up once and what he heard was the same electric static sound that he heard when he started using a sound app. A minute later, the static stopped and there was nothing but silence on the other end.

This is where it gets creepier. Ellis tweeted, “I kept listening. I heard what I thought was breathing, but it was so faint I can’t be sure. My heart was racing, so it was hard to hear. Then, just as I was about to hang up, I heard a very small voice whisper, ‘hello.’”

A Friend Cleanses His Apartment

Because Ellis believed that weird things will keep happening to him, he asked a friend of his to cleanse his apartment. For a whole week, everything was peaceful and it seemed like the cleansing worked but one evening, he felt like someone was watching him from the other building. Ellis took a photo of the supposed figure and it looked a lot like his drawing of David.

Ellis hasn’t dreamt of David for four months or so but he dreamt of him once again. He already removed his green rocking chair inside his room so in his dream, David was sitting on an old recliner. Ellis believed that he would already die in his sleep because of his latest dream of David so he tried his best to take photos in the dark.

In the morning, Ellis went through his phone and saw these: An Old Shoe And A Marble David Follows Him To Montana

David went to his home in Montana to visit his family for the holidays. He thought that David would no longer follow him but he was wrong. He noticed a set of footprints outside his family home.

Did David Ever Stop?

By March 12, 2018, Ellis tweeted the following: “For everyone asking if I’m alive: I’m doing OK! It’s been pretty quiet around here lately and I’ve been trying to focus on work. Of course I’ll keep you updated if anything strange happens, but for now I’m staying busy with drawing and other projects.”

How Is Adam Ellis Now?

He has not been posting anything about David anymore and he shared that the “IT” producer will be making his viral story into a movie. There are no other updates about the movie regarding David will be out.

Are Everyone Convinced With Ellis’ Story?

Well, a lot of people have waited for updated from Ellis regarding the ghost story but not all were convinced. Some said that Ellis is just really great at story telling since he was once a writer for Buzzfeed. Plus, he also has a book so it is possible that he just made the story up.