Garter Snakes are closely related to water snakes, with some species moving back and forth between genera. It is said that the Garter Snake is harmless, when in fact they are equipped with large teeth and venom! They spread their neurotoxin by chewing on their victim. Used mostly to stun their prey, it can also cause swelling and itching in humans. The Black Rat Snake, it has always been said that they do not have venom, but recent studies have proven that not to be true. When on the hunt the Black Rat Snake uses its constriction abilities to immobilize its meal. They often enter homes and become aggressive when someone corners them, making them feel threatened.

Enjoy video footage and the photo album below of Black Rat Snakes found on WooFDriving adventures! 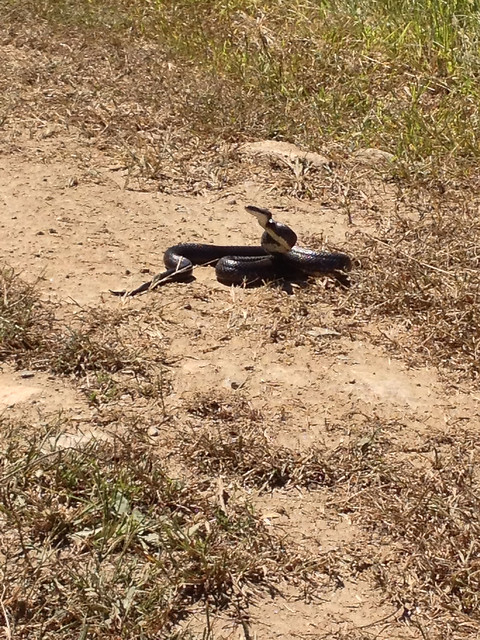 The Boa Constrictor, regardless of the danger, are sometimes kept as pets. They are aggressive snakes who tightly coil themselves around their prey to cut off air circulation. There have been several reports of young children or babies losing their short lives due to this “pet” escaping from its enclosure. Rattle Snakes have a large quantity of highly toxic venom ready to protect itself aggressively when necessary. They are very agile and have long fangs that make large wounds in its victim’s body. When in their environment, their body’s markings and color camouflage their presence making for accidental encounters while out on a hike. Pythons do not possess venom that will be harmful to humans as they kill prey by constriction. Squeezing their meal to death. Just like the Boa Constrictor there are several reports of the Python ending young childrens’ lives too soon. Careful consideration should be taken when deciding to keep these snakes as pets. Corn Snake, also called the Red Rat Snake are sometimes mistakenly misidentified as the dangerous Copperhead. It it thought that the Corn Snake is not dangerous to humans as it is thought not to be venomous, but some varieties are! Viper have long hinged fangs for deeply injecting their venom into their prey. These fangs are connected to a rotating maxillary bone so they can be tuck back against the roof of the mouth when not in use. The Viper can open its mouth 180 degrees for greater striking abilities. They also have the ability to figure out how much venom to inject into its victim based on the size of the victim. Mangrove Snake, also known as the Gold-Ringed Cat Snake has a mild venomous bite that causes intense swelling. There is no confirmed fatalities yet which is good as some people keep them as pets. They are known for their nervous, temperamental behavior and do not like to be handled.